"There wee leave you in that blessed dependancy, to hang upon him who hangs upon the Crosse…" -John Donne, "Death's Duell"

“Death of death, and hell’s destruction…”

by The Rev'd Dane E. Boston 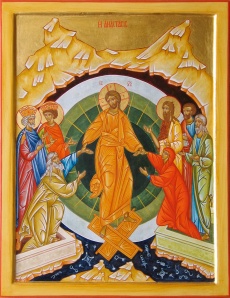 Though they are not much heard of these days, the traditional Advent themes are Death, Judgment, Heaven, and Hell. On this Fourth Sunday of Advent, I offer an out-of-season post that is, nevertheless, relevant to the final Advent theme: hell.

The sermon below was preached at a service of Choral Evensong last Eastertide. It is about hell, or more specifically the Harrowing of Hell. Though its original context was within the Great Fifty Days celebrating Christ’s Resurrection, I hope that it will resonate as we approach the wonder of Christ’s Incarnation. There can be no separation of his birth in Bethlehem and his death in Jerusalem. The bitter pains of Good Friday are foreshadowed in the shivering child in the manger. The agonizing death on Calvary can only have meaning for us if Jesus “was made man” in Bethlehem.

And the hope of the Resurrection—of Christ’s triumph over Death and Hell—matters as much in Advent as it does at Easter. At this, “the turning of the year,” we look and pray and yearn for a Judge whose dazzling body still bears “those dear tokens of his passion,” but over whom “Death hath no more dominion.”

A Sermon Preached at Evensong on the Fifth Sunday of Easter, April 28, 2013

May I speak in the name of Christ Jesus, crucified and risen. Amen.

Tonight I’d like to talk about hell. Or more specifically, the Harrowing of Hell. That may not seem an appropriate topic for Eastertide. Some of you may even be wondering about that old word “harrowing,” and what on earth it could mean in relation to hell. I admit that the Harrowing of Hell is not a doctrine that we spend a lot of time talking about in church, and it’s probably not a concept that we spend a lot of time thinking about in our individual spiritual lives.

And yet the Harrowing of Hell is important. We profess our faith in it every time we say the Apostle’s Creed. Twice every day, right here in these choir stalls, we gather for Morning and Evening Prayer and we proclaim our faith in Jesus Christ who suffered on the cross, was crucified, died, and was buried. And then we say: “He descended into hell.” We said it together just a few moments ago at this Evensong. What’s more, our choir has sung beautifully about the Harrowing of Hell in the second verse of our anthem this evening:

For Judah’s Lion bursts His chains, / crushing the serpent’s head;

And cries aloud through death’s domains / to wake the imprisoned dead.[1]

Let me say from the outset that I am not interested in giving you all a diabolical geography lesson. I will not try to pinpoint the location of hell for you, nor is this sermon a sightseeing tour of hell’s notable people and places. Besides stretching the limits of credibility and the boundaries of my knowledge, such a conversation would let us forget the horror of hell. When we turn hell into an overheated funhouse full of red devils and pitchforks and flames somewhere beneath our feet, we too readily and too easily disbelieve it, and laugh it to scorn.

But hell is not something comic or unbelievable. Though it has almost become a cliché, soldiers and civilians who have known the violence and horror of battle would surely agree with the statement, “War is hell.” Though the speed with which we are inured to the news of their suffering should shock and shame us, I would contend that the people of Boston, and the people of Newtown, and the people of Aurora, and the countless other victims of blind rage and mad hate have looked into the mouth of hell. And though we may not always recognize it as such, we have glimpsed hell’s destructive and deadening power at work in our own souls.

My friends, the hell that we carry within us; the hell that we see in the world about us; the hell that shows its ugly face in the power of Death and Sin over us: Christ has stood in the midst of that hell, and he, by his mighty weakness, by his powerful vulnerability, by his life-giving death, has triumphed over its dreadful power. And so in strength, in hope, in faith, we may stand and look into the mouth of hell and say “Yes, he descended into hell…but on the third day he rose again from the dead!” Hell and death could not hold him. Sin could not claim him. Hate could not keep him. Love did not abandon him.

Eastern Orthodox Christians have a very powerful way of depicting the Resurrection. In any anastasis, or Icon of the Resurrection, Jesus stands in the middle of the image, clothed in dazzling white and gold. Beneath his feet lie the broken gates of hell, one atop the other, in the shape of a cross—the instrument by which he wrought hell’s destruction. Around him on every side stand his “ransomed hosts,” ready to “pursue their way / Where Jesus goes before.” These are the patriarchs, prophets, and all those who longed for the day of God’s salvation. They stand tall, strong, and joyful. But in my favorite versions of this icon, Jesus himself is actually stooping ever so slightly. His bright Resurrection body is bent, just a little, as he reaches down into the graves at his feet to grasp the hands of a shrouded old woman and a bearded old man.

These two are Adam and Eve. Jesus stoops to take their hands, and to lift them up from their tombs. By that simple touch, Christ Jesus who is the Son of God and the Son of Man restores in himself the full dignity of human nature. Through that mighty deed, Christ Jesus who is the Son of Adam and the Son of Eve redeems all their children who sit in bondage and deep darkness. In Jesus’ death and Resurrection, God undoes the long legacy of disobedience bequeathed to us by our first parents. Sin’s power, though fearsome, is cracked. Death’s terror, though dreadful, is conquered. Hell’s claim, though strong, is broken, and Christ has set us free.

Beloved people of God, I do not know what hell you have been through, or what hell you are going through. I do not know what hell has opened beneath you through cruel circumstance, or what hell you have built around yourself, brick by heavy brick. I can only proclaim to you what we profess this evening: Jesus Christ has harrowed hell. He has plundered its power, and is risen in glory. You are never beyond his mighty reach. And as he stooped to raise all human nature, so now he stoops to raise you and me up from our tombs. Grasp his hand. Enter by the narrow gate. Lift your voice and join with Adam and Eve, and all the ransomed hosts, as they hymn the Paschal victory “in strains of holy Joy”: